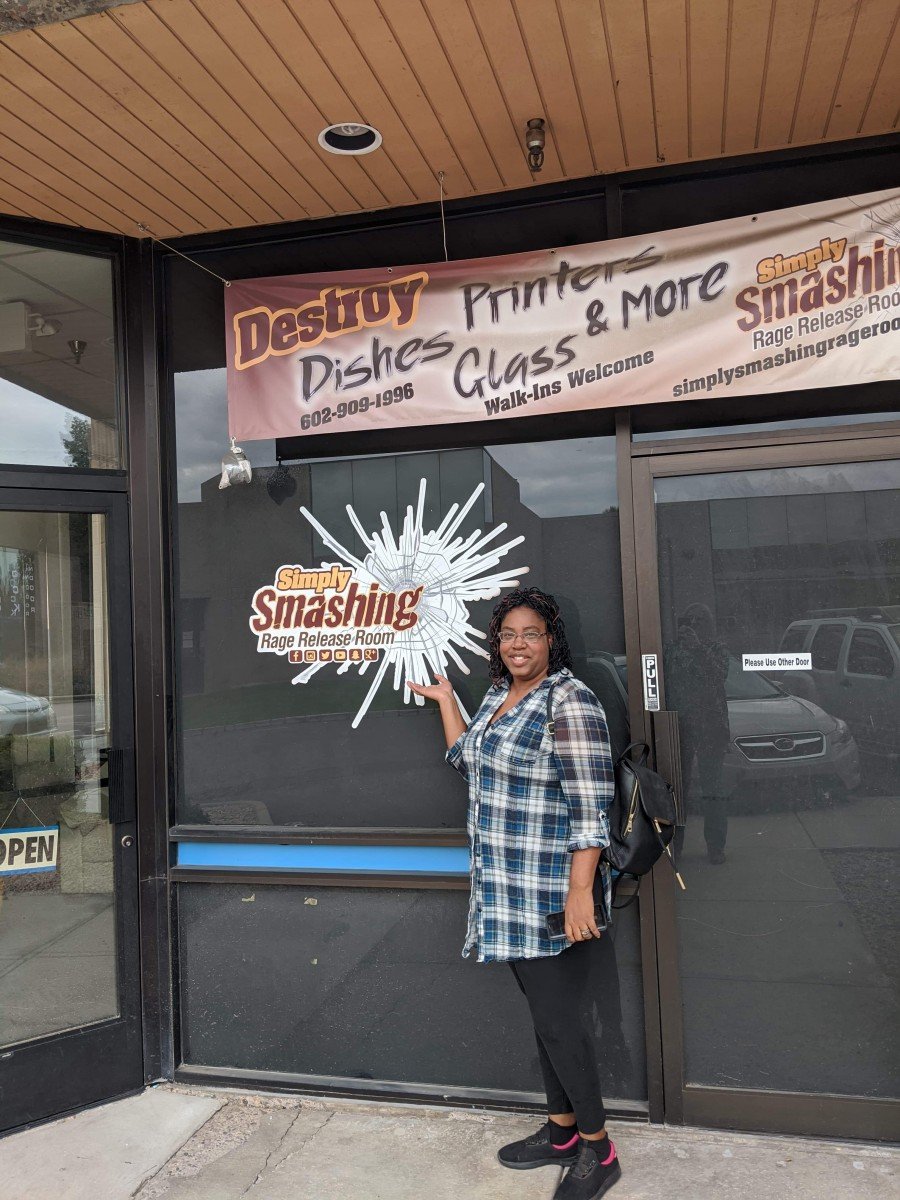 If you have a little bit of stress or aggression you need to work out then Simply Smashing Rage Room in Tempe Arizona may be a place you want to visit. Being a mom of 4 boys I was pretty excited to head there with one of my friends Vicki from Surprise Az Mom.  I thought it would be a great place to visit for those moms who just need to get the stress out.

I tend to get my stress out right away by either yelling, yes I yell or I call a friend and vent then its over so I don’t have too much that’s pent up. It still seemed like it would be cool to give it a try. We scheduled a 30 min session as opposed to a hr because a hr seemed a bit much.

When we first arrived Vicki noticed the sign was held by a rock wrapped in a washcloth and held on by ducktape. Since it was in Tempe we thought maybe it was to attract college students. Then we walked inside. I was first startled by the smell which I still have not figured out what it was.  The entire lobby was covered in dirt and dust. The furniture except for the tv appeared stained, old, and perhaps gotten from bulk garbage. I get its a rage room and you will be breaking things but I expected the lobby to be clean if not presentable.

There is a bathroom on site down the hallway also and there are lockers to put purses or other things in. I did not check out the bathroom mainly because I am a bathroom snob.

There were 2 employees there. They both seemed initially polite. My first irritation was when the male employee stated that he was going to have us wait for another separate group to arrive so he didn’t have to give his spiel twice. He said if they were not there by noon he would go ahead without them. Since we were 5 min early I didn’t mind waiting but perhaps phrasing it differently or not at all would have been more appropriate vs having it sound as saying the safety speech twice was too burdensome.  While waiting we filled out safety waivers.

We then had to watch a safety video. It was almost painful to watch. It was just blah. I laughed a little since we homeschool and my children have said lessons were blah before. As I watched it I wondered is this how my kids feel. Then I concluded nope because at the least what I present is more entertaining.

After the video the up-sells began. I couldn’t tell if they really were up-selling because it was the least enthusiastic up-sell I have experienced. It went something like so for this much I’ll give you a extra basket or we usually have toilets but they sell out quick so yea I could do like a monitor or some more bottles.  One other person even asked if they bought a t shirt do they get extra breakables. This would have been a perfect upsell moment. The female employee replied “yea that’s how it works.” Then she went on to something else. Opportunity missed.

One employee cleaned up the room before we went in but that just meant he swept the glass and remnants to the side still in the room. I know this because Vicki and I literally got to see him sweep the leftover mess to the side since it was not cleaned up before.  The rage room had a chalkboard, the wall to throw things at, and a wall that you could write on with sharpie. The wall to write on was not family friendly so if your kids can read and you don’t want them learning new and inventive ways to use the F word I highly suggest not taking them.

Inside the room there was a bluetooth enabled speaker so you could play whatever music you want. Safety gear which included a mask, and heavy duty gloves were provided. Hanging on the wall were bats and a mallet you could use to break things. There was a table in the middle of the room which looked like a giant spool and had floor mats on top. Hanging above that was a clip you could hang glasses from and break them with the bat. The clip didn’t hold very well.

I was actually in a pretty good mood. I had already vented to Vicki on the drive so by the time it was time to smash stuff it was more just a crazy fun time. Vicki and I usually have crazy fun together anyway so this was fun and breaking stuff. We finished in about 15 min so agreed the hr would have been way to long.  I will say wear thick soled shoes I ended up with glass on the bottom of my shoes. I also ended up with glass in my shirt but unless u wear a turtle neck I doubt that could be helped. We smashed lots and it was fun.

All in all I would say Vicki and I had fun with the breaking items. The rest left a bit to be desired. Perhaps a good cleaning and some customer service training and it would be great. In conclusion if you have the urge to release some stress and break some stuff this may be the spot for you so long as you can withstand the messy lobby.