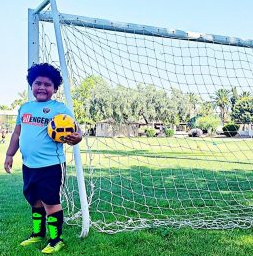 Summer time is here and that means summer camp. Each year I like to find something for each of my boys to participate in. This year Alijah decided his favorite thing was soccer so when I was invited to have him attend camp in exchange for  a review I immediately said yes.

Everyone’s first questions are always where is it followed by how much does it cost. Challenger Soccer Camps hold camps in many places in the United States and Canada and have varying prices based on the camp chosen so please check their website for more information.  One cool thing is that with registration each kiddo receives a soccer ball and a t-shirt. They can also get a jersey if you register them at least 30 days before the start of camp.

Challenger Sports is one of the leading soccer camp companies in North America. It has been around since 1984 and has held over 2000 summer camps in the United States and Canada.  They combine the most popular elements of their two existing industry-leading camp programs, British Soccer and TetraBrazil.  They use these programs and then integrate them with a collection of the most effective soccer practices used by youth teams around the world.

The Camp offers programs for each age & ability level.

On Challenger Internationals website they talk about how they have offices in over 18 places and hold year round training and recruitment. They speak about all that goes into selecting the very best. I’m going to brag on our coach because we interacted with him the most but from observing the rest they are all very skilled and work great with the children.  Every coach had the same kindness about them and seemed to know the game of soccer at a amazing level. From listening to them speak about themselves I know some played professionally and some went to school to coach and have been able to coach for years. In my opinion Challenger International did a great job hiring coaches that clearly love their work, the kids they coach, and love the game of soccer.

Alijah was in the Tiny Tykes group run by Coach Matt. Let me start by saying we adore him. He is 27 yrs old and is from England. He has been with Challenger for 5 yrs and before that he taught and coached in England. I want to take a sec and say if you can get him as your coach do it. He is amazing with the little kids.  He kept their attention and if he saw someone falling behind just scoped them up and included them.

My son can be very high energy but Coach Matt and the other coach helping took the time to listen to him and to play with him. At one point they even played along with him when he put a soccer ball under his shirt because they ate the “ice cream”. When we left Alijah said he was going to miss his coach and he was the best. This stood out to me because Alijah has done soccer before and was never enthralled with his coaches as he was just in a week of camp.

Another thing I liked about our coach was that he was fun and knowledgeable but when the kiddos needed redirecting he did it in a very kind way. Alijah loves to share and gave one of his fruit snacks to a little girl. Coach Matt saw and just nicely said ” Oh we can’t share food since we don’t know allergies.” He took the fruit snack and gave it back to Alijah and said ” I guess you have to keep it but I  know you don’t mind because I bet you love fruit snacks.” Normally Alijah would get upset but the way he said it and even patted him on the shoulder while talking Alijah just gave him a huge grin and took the fruit snack back.

On arrival a coach from Brazil met with each parent. He explained the sign in process and gave Alijah his soccer ball. After the initial meeting the Coaches did a group parent meeting and explained who they were and their background. It is a international camp so they are all from different countries. Each coach spoke about themselves and their history with soccer. This was a great way to start because any parent wants to know who will be teaching their children. After they introduced themselves and went over how camp would work and the sign in and out procedures the children were assigned to their individual groups and camp began.

I fully expected them to start with drills and skill training but instead Coach Matt sat down with them and talked about pirates. Then they played pirate games. I was confused at first trying to figure out what it had to do with soccer. The more I watched the more I understood. Each game taught some kind of skill. They chased the seagull and learned to control the ball. They fought off the seagull and learned to kick. Looking like a pirate taught balance. And the best part was it was so much fun it kept each child completely entertained.  The next few days were the same skill learning in the form of a game. They went to the zoo, played superheros, and took a trip to space.

Alijah came home and wanted to teach his brothers how to play superheros. He took the skills he learned without even knowing he was learning and had about 2 hours worth of fun with his older brothers. We are a homeschool family so learning thru play and life is what we love so this kind of sport learning was right up our alley.

A big thing I  noticed was that all the coaches helped each other. When our coach needed a helping hand one of the others would step in and help. Coach Ian was always assisting Coach Matt with the little kiddos. He played a seagull, a monkey, and a space alien. When they children were playing the coaches would say things like oh help your team mate. Personally I feel the willingness to help each other and the verbal reminders to help further highlights the teaching on teamwork.

We were in the smaller kids group but I took the time to go observe some of the older children groups. The coaches there did not use pirate games and silliness but they did use other games and drills to teach skills and teamwork. The kiddos were given fun homework assignments and had small scrimmages at the end of the day. I was watching Coach Phillippe (not sure if I spelled his name correct) with the older kids. He was firm but kind. He took them through drills and focused in on their skills.  It was interesting to see how the method of coaching had the same principles but the methods were different and adapted for each age group.

Long story short if you have made it all the way thru this post I will end it by saying camp was amazing. I recommend it to anyone and I know Alijah loved it and that is the most important thing. Be sure to check out their website for other camps and learning opportunities.