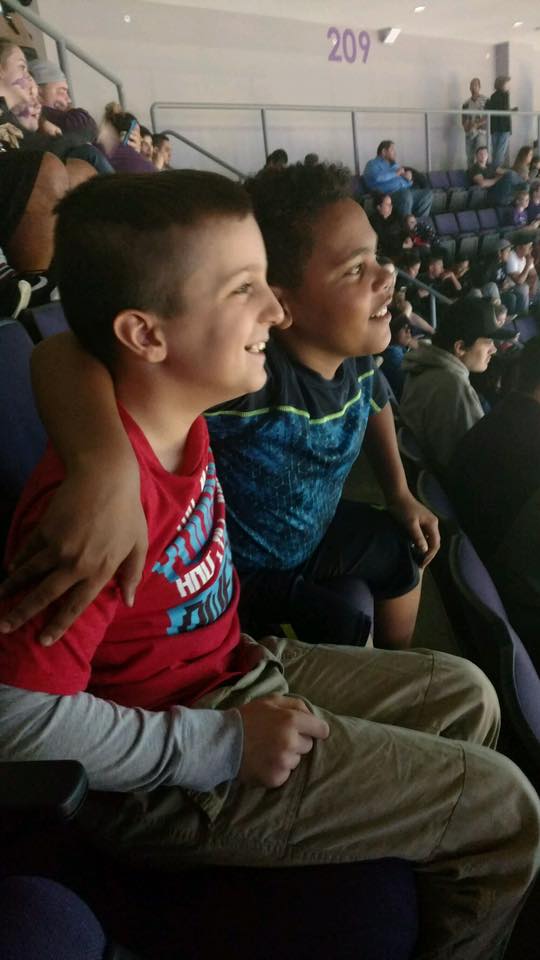 2 almost 3 yrs ago my son’s life changed for the better. I like to think it was because I’m an awesome mom but the truth is its because he met this one person. My son Aidan was homeschooled until 3rd grade. I loved homeschooling him but he really wanted to go to school so with great reservations I decided to let him go.

He came home talking about his teacher who he absolutely adored. This teacher took the time with him to realize that he was a beautiful soul just a little shy with some sensory and speech issues. Well being with her he quickly progressed.

Then he came home talking about a boy in his class that was the funniest kid ever. He wanted so badly to hang out

with this kid. So I reached out to the mom on Facebook.  She responded quickly and as we got to talking we realized our boys were so much alike. Both with sensory issues and both just the most loveable little men you could ever meet. The first playdate was set. My son didn’t want to come home. He had met his brother from another mother.

Over the last few years, these 2 boys have taught me so much about love, loyalty, and friendship. They constantly have each others back and everyone knows they are best buds. But its more than that.My son has become part of his Antmans family. When he goes to their house I watch him walk in like he lives there. I see the love and the affection all of his best buds family has for him. From Parents to grandparents to uncles they all know who my Aidan is. Its the same with his best bud. Everyone in my family knows that’s Aidan’s brother. Aljah my youngest calls him Aidans Antman because at 4 yrs old he sees the bond these 2 boys have. Neither one of them will ever be the most popular kid on the block or the most outspoken but it doesn’t matter because they have each other.  A football season ago Antman wanted to play tackle football but then kinda hated it at first. My Aidan decided he was going to play with his bud. So he played for his team and for his buddies team. 9 yrs old practicing with one team Mon and Wed then his other team Tues and Thurs. Then a game Friday night and a game on Sat. He was exhausted but it didn’t matter because his buddy needed him.

Antman has done so much for my Aidan too. I remember Aidan being sad. He had a hard day one morning. He went to school with tears in his eyes and basically just feeling overwhelmed. He ended up going to his buds house and while there was texting me. He came home on cloud 9. I asked him why he was suddenly so happy and he tells me he got to hang out with his best friend and they talked and played so he felt better. He says his bud told him to just say sorry and it would be better so he texted me and it was better. they are really doing something so who am I to tell them it’s adorable lol.   I’ve heard my son be asked over peoples houses but he won’t answer until he finds out what he and Antmans plans are. I’ve also seen them together in a group and they are together regardless of what the rest of the group is doing. Each one is always checking on the other to make sure they are good to go. I laughed when I heard a boy tell my son he was his best friend and my son said well you can be my friend but Ant is my best one. They always have room for more friends and they have a few really good ones but it’s nice to know that matter what and no matter who they include in their circle they still have each other.

These 2 boys have taught me so much about friendship and loyalty. To look at them and know that there is not one single person that could break their bond humbles me. To picture them in the future as they grow together amazes me. To know that they share the same likes, beliefs, and faith in God gives me hope.

I’ll be forever grateful that my son came home talking about the funniest boy ever because without this funniest boy my son would have never met his brother from another mother. It’s my hope that all my boys find a best bud like this. Someone to tell their secrets, their hopes, their dreams. Someone to plot against their siblings with and someone to be their wingman when they grow up.